Zen and the art of twang: LA's cosmic psych cowboys return after a decade-long hiatus... 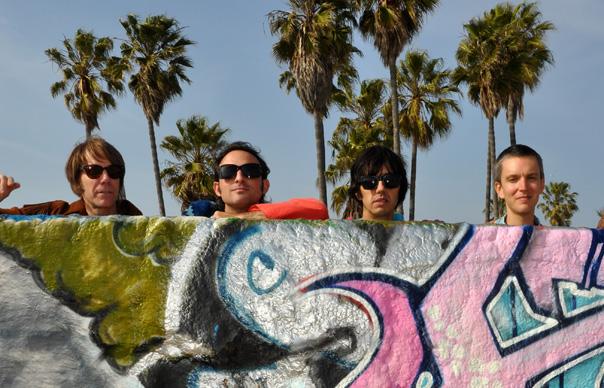 Zen and the art of twang: LA’s cosmic psych cowboys return after a decade-long hiatus…

Picking up nearly where they left off in their early-2000s prime, Los Angeles’ Beachwood Sparks’ reunion renews their kaleidoscopic, Californian approach to country-rock—a good-natured, soul-searching wash of sound in which vibe is everything. The Tarnished Gold, mature, with a revelatory appreciation for the simple life, might prove to be the true spiritual heir to their auspicious 2000 debut: winsome Zen-like roots/rock bursting from the heart with rich, ebullient harmonies, and atmospheric smears of steel guitar amid gentle sun-baked melodies.

In their original 1997-2002 run, Beachwood Sparks were a band out of time. Too late for much notice by the No Depression generation, but appearing well in advance of the waves of Fleet Foxes and Bon Ivers, their timing was questionable. Yet in their unassuming way, they were perhaps the most convincing descendants yet in a cross-generational lineage of classic LA country-rockers, starting with the Byrds, and winding through the Flying Burritos, the Long Ryders, Minneapolis transports the Jayhawks, and Sparklehorse—though with an Elephant 6 twist: a raw sense wonder in their voices (and those heavenly harmonies), and a fascinatingly trippy bit of noise/rock and psychedelic experimentation in their sound.

All four Sparks principals—including main songwriters Chris Guntz and Brent Rademaker—plus guitarist and frequent Ryan Adams collaborator Neal Casal, are on board for the rebirth, recorded essentially live in the studio. From the ease-in of the opener, “Forget the Song,” softly burnished vocals enveloped in electric guitar curlicues and ethereal steel, the group pulls off their particular and peculiar world-unto-itself, floating-dream ambiance.

While the self-explanatory “Sparks Will Fly,” a relatively rambunctious tribute-to-themselves replete with exhortative Beach Boys-style backing vocals—“Tampa to LA on a West Coast flight!” sings Farmer Dave Scher with a radiance worthy of Chuck Berry on “Promised Land”—kicks up some dust (especially given its shimmering Notorious Byrd Brothers guitar break), most of The Tarnished Gold inhabits those groggy moments between dreamland and wakefulness—gauzy, pensive mindtrips atop simple folk structures, lyrics zeroing in on love and loneliness, dead-ends and simple acceptance, basic human existence.

“Water From the Well” is a case in point: With its gentle, stair-step guitar and rolling-river melody—rustic contemplations on freedom and the wonder of nature—it’s a kind of salve, soul music for complicated times. “Nature’s Light” and “Leave That Light On,” sister songs both, follow suit, sprawling, expansive pieces, hushed voices merging with gentle cascades of fingerpicked guitar.

Not everything works to perfection: “No Queremos Oro,” a mariachi-style tribute to Gunst’s LA roots, ambitious and warmly executed, simply doesn’t fit in; Rademaker’s down-home “Talk About Lonesome” is surely the album’s catchiest, most straight-ahead number, exuding pure Nashville-style songcraft, with harmonica accents and a sing-songy chorus. But it doesn’t play to the band’s strengths, its lack of depth rendering it (admittedly, over many listens) as a kind of throwaway.

“Earl Jean,” showing off their innate pop sense, though, might be Tarnished Gold’s most impressive cut. Buried toward discs’ end, it’s a love song, its laidback seesaw melody ushering listeners into their own personal daydream, before pin-prick guitar leads explode into an open-hearted vocal. “Don’t feel so strange/As there could be at any moment a change,” goes one lyric, reminiscent of Dillard & Clark‘s “Out On the Side.”

Other highlights abound: “The Orange Grass Special,” echoes of Johnny Cash and Carter Family Americana, is a nice detour; brief closer, “Goodbye,” verging on lullaby, wraps things up as pure dreamscape. Still, Tarnished Gold’s gorgeous title track is its centerpiece—musically and philosophically—and definitive Beachwood Sparks: with Gunst’s vocal cradling its evergreen melody like a newborn baby amid tender harmonies and sunrays of steel guitar, it’s part love song, part elegy to the mysteries of life: “Funny how when you find what you’re looking for/It was already there.”
Luke Torn

Q&A
Chris Gunst
What is it about Byrds/Burritos country-rock that holds such sway?
I think that the connection to Byrds, Burritos, etc. became more of a talking point for press rather than how we felt, and I think it kind of pigeonholed us a bit. I mean obviously the sound of some of those records was influential, but so was . . . Felt, Ride, Spiritualized, Joy Division etc. But how do you wrap that craziness up in a soundbite?

How would you characterize it then?
I don’t think it was a desire to live in the 70’s or something. I think the style was influential as well as enjoyment of the aesthetic. It is in our collective conscious as a band, and a place where we have common ground and meet. When we are together, this is the music we make. The band seems to take on a meta-identity of its own.

What does “Cosmic American Music” mean to you?
Two things: When I hear that, I have attachments to certain music or bands–such as Parsons, Byrds, Burritos, Beach Boys, but I also have a more literal understanding: America, the openness of the landscape, independent nature as a tradition of some Americans, connection to the land, mixing of cultures, creating new traditions, reinvention, alchemy.
INTERVIEW: Luke Torn