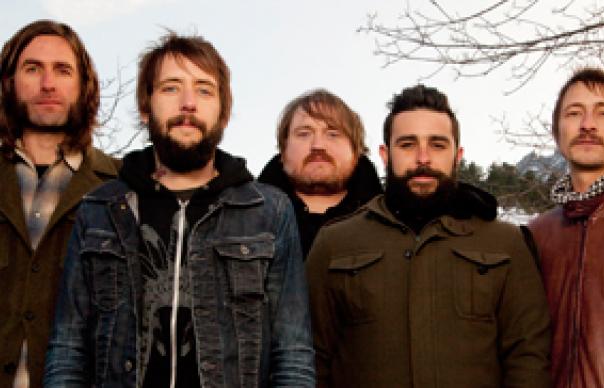 Beyond the six-string fireworks and an ever-present vocal twang, the current generation of Southern rockers shares one common element with its wild and woolly forebears: the capacity for attaining a sort of spiritual elevation within passages of inspired musical interaction. You can find plenty of these goosebump moments in the work of Kentucky’s My Morning Jacket and Tennessee’s Kings Of Leon – and now in that of South Carolina’s Band Of Horses.

On this third LP, Ben Bridwell’s band leave the lo-fi balladry and middling indie-rock rave-ups of their previous two LPs in the dust. That’s not to say these LPs didn’t have their stellar moments: “The Great Salt Lake” and “Funeral” from their 2006 debut, Everything All The Time, and “Is There a Ghost” from ’07’s Cease To Begin were searching visits to a rich Southern rock heritage. With Infinite Arms, however, Bridwell has surpassed himself. Not only has he re-connected with his Southern heart, relocating to South Carolina after starting the band in Seattle, but he’s also surrounded himself with a stable unit: four talented, like-minded players in drummer Creighton Barrett, keyboard player Ryan Monroe, lead guitarist Tyler Ramsey and bassist Bill Reynolds. The first two are on their second Horses record, the other pair joined during touring behind Cease To Begin.

Maybe more important, though, are the developments in Bridwell’s songwriting, as he interweaves the elliptical verbiage of his past records with detail of an intensely visual nature. First track “Factory” opens in a hotel lobby, leading to brief eye contact with a stranger in the elevator, a stop at the snack machine and other mundane details that take on an air of mystery through musical context, conjuring up the sort of hyper-reality found in William Eggleston’s photographs. Like those pictures, the songs hint at storylines whose specifics you are left to piece together.

Musical and visual juxtapositions permeate the album, taking centre stage on “NW Apt”, a nostalgic, atypically straight-forward series of aural snapshots picturing various places where Bridwell crashed while living in Seattle and touring the region; they’re paired with pile-driving drums and bludgeoning guitars, ending with the hum of an amp hanging in the air like a receding memory.

On “Laredo”, the band deftly fuses the buoyancy of The Byrds’ “Feel A Whole Lot Better” with the jutting-jawed physicality of Neil Young and Crazy Horse’s “Cinnamon Girl” – yet the performance is bracingly modern in its aggression. First single “Compliments” features the close harmonies of Ramsey and Monroe over a “London Calling” strut, and they turn up again in close-mic’ed intimacy on Ramsey’s candlelit ballad “Evening Kitchen” and on the Morgan-penned country-rocker, “Older”.

One of the album’s defining aspects is its vivid sense of the American expanse, stretching northward and westward from Bridwell’s Carolina, retracing his own journeys. The title track is a dreamscape that inhabits the woodsy Northwestern terrain of Fleet Foxes, with Bridwell’s stacked harmonies stretching heavenward. “On My Way Home” resonates with SoCal buoyancy, even as it yearns for Dixie. It’s a track that’s key to the album as a whole: far-reaching, but rich in local colour, gleamingly modern, thanks to Dave Sardy’s deft mix, but steeped in tradition. And while it sees Ben Bridwell leaving his lo-fi past behind, Infinite Arms is a neoclassic landmark that you’ll need to get on vinyl. This is a record that begs to be flipped over and played again.
BUD SCOPPA