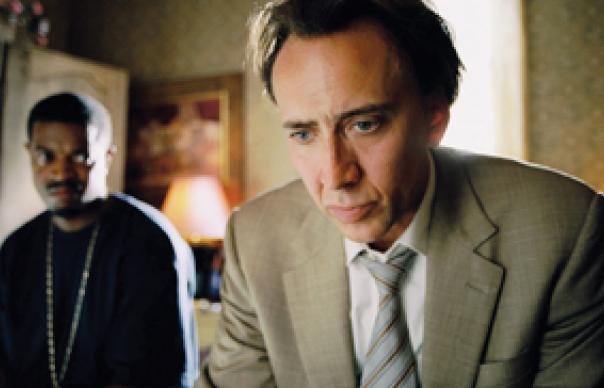 Although it shares its title and a certain grubbiness with Abel Ferrara’s 1992 Bad Lieutenant, Werner Herzog’s film is a very different proposition. A surprise, you might think: after all, many of Herzog’s protagonists are eccentric loners, driven by madness and obsession, exactly the kind of character Harvey Keitel played in Ferrara’s film.

But Herzog, a director never known for taking half measures, pushes the original idea of a murderous, depraved and drug-addicted police officer way out there. While it’s true that there are very few actors who’ll take themselves to the edge like Keitel, similarly there’s no-one prepared to unleash his inner freak quite as fearlessly as Nicolas Cage.

Indeed, Herzog is reported to have instructed Cage to “turn the pig loose”. So, sporting one of the most terrifying hairpieces of his career, Cage does adrenalised, bug-eyed intensity as Terence McDonough, a coke-and-Vicodin addicted homicide detective who’s investigating a gangland murder in post-Katrina New Orleans. At the start of the film, McDonough injures his back saving a perp; the injury dogs him continuously, and he assumes a hunched, limping gait, somewhere between Richard III and Quasimodo. The murder case enables us to watch McDonough go about his increasingly deranged business. His interview techniques include cutting off the oxygen supply on an elderly lady’s respirator. He sees a dead man’s soul breakdance, and hallucinates a pair of iguanas – shot in super psychedelic close-up by Herzog – who serenade him with Johnny Adams’ “Release Me”. He’s up to his eyes in gambling debt, and to make matters worse, his girlfriend – call girl Frankie (Eva Mendes) – is having problems with a jilted client.

In lesser filmmakers’ hands, perhaps, this might have been frankly awful. But Herzog runs with the material. Shot in a harsh, bleached-out light, Herzog’s version of New Orleans is, in the wake of Katrina, a rotten and dilapidated Wild West frontier town, recalling LA in classic noirs. Everyone is either on the make or high. Kilmer does good second-string as McDonough’s partner, and there’s great turns from Brad Dourif, Jennifer Coolidge and Fairuza Balk. The story is grim, but, equally, it’s hilarious – Herzog mixing anguish, slapstick, irony and pathos in a way that mirrors McDonough’s own loopy mood swings. Certainly, it’s not a stretch to suggest that Herzog has in Cage found his most simpático lead since the great Klaus Kinski.
MICHAEL BONNER