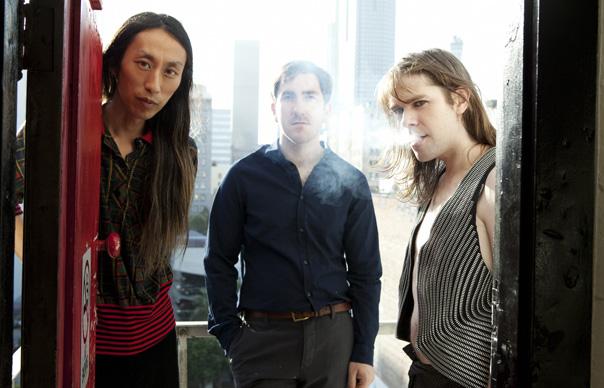 The last time Ariel Pink attracted any kind of notable attention was when he had an onstage meltdown at Coachella in April 2011. As his band played, Pink – real surname Rosenburg – refused to sing and spent part of the set inspecting the drum riser and biting his fingernails. Later he shrugged it off, as well he might: it’s not the first time Pink has flaked out – Uncut saw a Brighton show in 2006 that lasted five minutes before he flounced off – and it won’t be the last. In his established role as indie-rock’s court jester, a merry prankster prone to tantrums but equally capable of delighting, he can get away with almost anything.

Possibly he feels that way too. No one was more surprised than Pink by the success of 2010’s Before Today, his first properly recorded album for 4AD, who’d signed him on the back of a string of enchanting, wildly lo-fi psychedelic bedroom recordings released through Animal Collective’s Paw Tracks label – a catalogue that came, incidentally, with a committed fanbase who long ago had cast Pink as an outsider icon. Given a push to a wider audience, the combination of Before Today’s exotic soft-rock nuggets – “Round And Round” in particular – and this loveable LA gutter-punk proved bizarrely appealing, like hipster catnip.

Yet for all the acclaim, Pink felt uninspired, because Before Today featured tired old songs from his past, reworked with moderate enthusiasm by his band. Mature Themes represents a fresh start: a new batch of material thoroughly worked through by Pink and the Haunted Graffiti guys in their own time, in a studio they built themselves in downtown LA. Produced and mixed by his friend and former bandmate Cole M Greif-Neill, who even transcribed Pink’s ‘mouth drums’ using a sampler, Mature Themes is Ariel Pink in glorious hi-fi for the first time. Finally, he sounds sharp, shiny and alive – in focus, if you like – excited by the possibilities of his own music.

That’s not to say Pink’s eighth album is a pushover like Before Today – it isn’t. Rather, like the eccentric mish-mash of House Arrest, it’s diverse and perverse, even a little juvenile in places: calling it Mature Themes is something of a red herring. Sure, he tackles sex, food and death, but in Pink’s grubby hands that means a woozy waltz called “Symphony Of The Nymph” (“My name is Ariel and I’m a nympho”, he coos), the Zappa fuzz of “Schnitzel Boogie” (”I’m eating schnitzel/ I’m eating schnitzel”), and a line in “Kinski Assassin” that runs “Mother-twin Genesis went down with the plane” which refers to the time Pink travelled to Australia on the same flight as the surgically altered Throbbing Gristle frontman, who he thought looked like his mother.

Part of the absurdity of Pink’s ascent into acceptable society lies in the notion that he’s now almost expected to produce hits, when in fact he’s always been an intrepid experimental artist whose preferred form of expression resides somewhere between ’70s psychedelia and ’80s gothic rock. Such freedom means that one moment, he can record a tender cover of Donnie and Joe Emerson’s soul number “Baby” with DāM-FunK, the next he slyly tapes visiting 4AD boss Simon Halliday talking into a microphone and turns this into a medieval jig doused in feedback called “Is This The Best Spot”. On the apple-pie pop of “Mature Themes”, Pink is a dead-ringer for Elvis Costello as he simpers “For I solemnly devote myself to thee” to some college sweetheart.

It was Halliday who suggested Pink call the record Mature Themes. He’d wanted to name it Farewell American Primitive after one of its songs, but realised new albums by Neil Young and Dan Deacon also featured America in their titles, and the idea that Pink might be perceived as a flag-waving partriot or as a spokesperson for anything appalled him. The irony is that Mature Themes, full of nonsense and wonderful ideas, further cements his reputation as one of the more vital voices of his generation. He’s a loose cannon, but he sure brightens the place up.
Piers Martin

Q&A
ARIEL PINK
Sounds like you’re pleased with Mature Themes.
Yeah, I wanted to have an opportunity to write songs like I used to and not worry about being charged for studio time. The first thing we did when we got our advance was we leased a space and built our own studio within it. We made it cosy and lived there for a number of months and it was a delightful experience.

Anything on the album you’re particularly proud of?
Well, I’m proud of myself for having the guts to write words to these songs, which was a very trying experience for me because I’ve been suffering from artist’s block. The music is easier: everything comes to me as music and then you have to slap a face on top of it if you want it to come across as pop music and not muzak.

Does your global fame amuse you?
I was thinking about this the other day and I guesstimated the best-case scenario is I probably have about 200,000 fans or 500,000 fans at the very most. Then there are 7 billion people on the planet and so it’s something like 2 or 3 percent of the population has heard me and 97 percent of the population has not heard me. So there is still work to be done.
PIERS MARTIN