Anvil! The Story Of Anvil

This really is Spinal Tap... 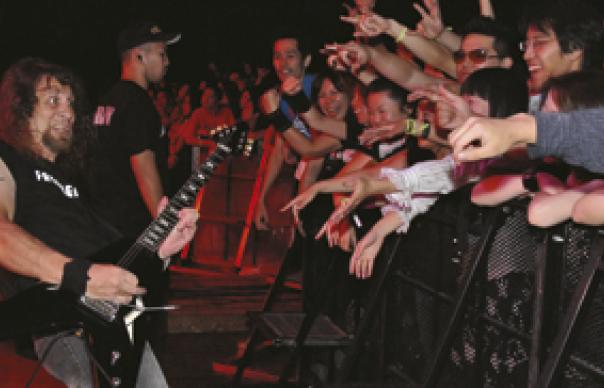 
The premise is familiar: documentary-maker meets ageing, also-ran metal band, beset by misfortune, prone to mishap, abandoned by fashion, oddly regarded in Japan. Where this – if you will – rockumentary differs from This Is Spinal Tap is that its subjects are a real band: Canadian headbangers Anvil. For a brief shimmer of the early 1980s, Anvil were considered peers of Bon Jovi and Whitesnake, and seemed bound for similarly profitable success. It never happened, and the lifelong mates at the heart of Anvil – singer Steve “Lips” Kudlow and drummer Robb Reiner – never recovered.

Anvil! picks up the story three decades from Anvil’s excruciatingly brief flirtation with fame. Though Lemmy, Slash, Lars Ulrich and Scott Ian attest to Anvil’s merits, Lady Luck has not so much ignored Anvil as served them with a restraining order. Kudlow makes school lunches. Reiner is a builder. But director Sacha Gervasi comes not to mock – a former Anvil roadie, he knows them well. As the fifty-something Kudlow and Reiner reform Anvil for a European tour and new album, Gervasi follows. What results is not just one of the best films ever made about rock’n’roll, but an astute exploration of the thin border between ambition and dementia, a moving hymn to friendship, and a heartbreaking acknowledgement of the utter unfairness of life in general.

What haunts Anvil is that there is no quantifiable reason for their failure. Where an aspiring sprinter could be philosophical about the fact that he just isn’t as quick as Usain Bolt, Anvil know that their obscurity is merely a function of the same dumb luck that makes stars of others: within their field, they’re as good as most, and for this reason are unable to overcome a sense of entitlement to some glory. Their tour is a disaster, but the puppyish, indefatigable Kudlow observes “At least there’s a tour for things to go wrong on.” Nobody wants to release their new album; they do it themselves. Friends and family sigh, cry, shake their heads, uncertain whether to marvel or despair at Anvil’s infuriating, inspiring, refusal to capitulate.

Gervasi realises there is no escaping the spectres of Spinal Tap, and contrives an undertow of wittily underplayed references: an interview discussing the first song Anvil wrote is also set in a delicatessen, a visit to Stonehenge is undertaken, a sequence of Anvil’s crashingly gauche album titles recalls the immortal “Shit sandwich” punchline (the cruel coincidence of Reiner’s name with that of the director of This Is Spinal Tap passes unremarked). At the heart of things, however, is a recognition that Anvil’s story is not comedy, but tragedy – the tragedy of anyone thwarted by fate’s caprices, which is to say the tragedy of almost everyone. “I’m doing everything right,” whimpers Reiner, “and I’m being shit on.”