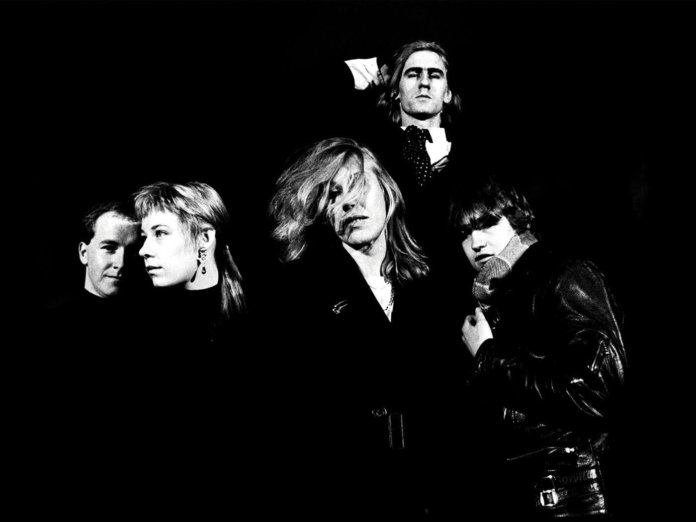 In 1982, like fellow Australians The Birthday Party before them, and A-ha the very same year, Brisbane’s The Go-Betweens relocated to London to seek wider fame and fortune. By 1985, with neither a “Release The Bats” nor a “Take On Me” to their name, both still eluded them. Their third album, 1984’s Spring Hill Fair, had disappointed group and critics alike, and as they formulated their next move, they found themselves instead hunting high and low for their fourth label.

What arrived over the next three years, however, cemented Robert Forster’s and Grant McLennan’s reputations, as this follow-up to 2015’s exhaustive look at the first years of their career demonstrates. With 129 tracks – three increasingly impeccable albums on vinyl, five CDs of demos and radio sessions, not to mention Fountains Of Youth,  a spirited, hitherto unreleased 2LP live set – it provides detailed evidence of the band’s growing confidence and continuously refined songwriting (plus occasional missteps), culminating in what many consider one of the southern hemisphere’s finest albums, 1988’s 16 Lovers Lane.

Three years earlier, record companies had been wary. Some showed interest, of course, helping fund demos included here on The Devil Is In Your Dress, revealing McLennan’s dramatically vulnerable “In The Core Of A Flame” and Forster’s “Head Full Of Steam” as fully formed, if less glossy. Nonetheless, when they found a home, Elektra UK, the plug was pulled mid-sessions.

Their approach, however, was inconsistent with the times, with the band hungry for more than a slot on NME’s C86 cassette. True, “The Ghost And The Black Hat”’s strange, accordion-fuelled cadences nodded to 1983’s “Cattle And Cane”, and “Head Full Of Steam” jangled like Felt; but the latter’s yearning was outclassed by “Apology Accepted”’s erudition – in spite of Tracey Thorn’s presence on both – and “Spring Rain” was as deceptively refreshing as its subject. Little wonder that “Reunion Dinner” – an odd, spoken-word slab of musique concrète occasionally reminiscent of The Velvet Underground’s “The Gift” – was dropped. As the pianos on Forster’s “Twin Layers Of Lightning” suggested, the band were chasing a more extravagant, if as yet unrealised sound.

This was unveiled on June 1987’s Tallulah, though Fountains Of Youth, recorded live in London a month before, suggests their new approach had been honed on the road. McLennan and Forster were now so in tune it was hard to distinguish between them, and they’d also added a fifth member, a 20-year-old multi-instrumentalist discovered in a Sydney bar. Amanda Brown expanded their approach, her violin eagerly leading McLennan’s “Right Here” and offsetting trenchant observations of jealousy with playful pizzicatos on “Someone Else’s Wife”. Additionally, she provided a poignant counterpoint to his wit – “Apart from that albatross around your neck”, a doctor assures him, “the tests are negative” – amid “Hope Then Strife”’s flamenco flourishes, while her trilling oboe provided the sombre nucleus to “Bye Bye Pride”, McLennan’s fine fable of betrayal.

Forster was not to be outdone,  with “You Tell Me” pairing nagging guitar riffs with swooning vocals, while “Spirit Of A Vampyre” boasted a tangle of REM-like, chiming guitars. Admittedly, “Cut It Out” was, at best, a gauche pastiche of Prince’s “Kiss” – a breathless, less angular live take shows how it should have been – but it improved on the lo-fi blooper included here within Run From Him’s demos. “The Clarke Sisters” compensated, however, its portrait of three steel-grey-haired sisters who “sleep in the back  of a feminist bookstore” like a tremulous take on Grey Gardens,  its spookiness emphasised by Forster’s wilting vocal.

16 Lovers Lane, recorded in Sydney after Vickers retired to America, lacked such eccentricities, and if Liberty Belle… had represented  a cerebral black-and-white Go-Betweens, and Tallulah a sepia-tinted version, this found them in full colour, lit by glorious sunshine, though storms rumbled in the distance.

In fact, the accompanying 14 demos highlight how Forster and McLennan had developed their aesthetic so thoroughly that producer Mark Wallis needed do little more than add discreet glitter to their acoustic flavours. Admittedly, an embryonic “Was There Anything I Could Do?” lacked the album version’s drive, its lyrics still gestating, and “You Can’t Say No Forever” demanded further development; but McLennan’s waltzing “You Won’t Find It Again” and “Casanova’s Last Words” – demoed in fragile acoustic form, then re-recorded with Brown’s violin as lively as Steve Wickham’s work  for The Waterboys – confirm a surfeit of impressive material.

Whatever polish Wallis provided failed to mask their masterpiece’s penetrating barbs, epitomised in “Love Goes On!”’s emotional complexity: “There’s a cat in my alleyway/Dreaming of birds that are blue/Sometimes, girl, when I’m lonely/This is how I think about you.” That single “Streets Of Your Town” fell short of the charts can only be attributed to its images of battered wives and butchers shining knives, while the seam of volatile regret running through follow-up single “Was There Anything I Could Do?” can’t have helped its cause commercially either.

Ultimately, despite its  warm heart – not to mention McLennan’s reverb-drenched “The Devil’s Eye” and Forster’s parting shot, “Dive For Your Memory” – their sixth album’s dominant mood was one of melancholy. Forster’s “Love Is A Sign” was awash in wishful thinking, and he and Brown combined in bittersweet fashion on “Clouds”, while  her oboe poked fun at “I’m Allright”, McLennan’s succinct ode to unrequited love.

Furthermore, if his soothing “Quiet Heart” displayed none of the inarticulacy it portrayed, McLennan determined wistfully that it “doesn’t matter how far you come/You’ve always got further to go”. A KCRW session included on Trying To Be A Strong Person offers, they marvel afterwards, “one of the best versions we’ve ever done”, and the same is true of that November night’s “Clouds” and “Dive For Your Memory”.

“We stood that chance,” Forster concluded on the latter, but it wasn’t to be. Though 28 demos were recorded for their next album – many unearthed for the first time on this set’s final 2CD comp, Loving Shocks, some, including McLennan’s fine “Easy Come, Easy Go” and Forster’s reflective “I’ve Been Looking For Somebody”, later re-recorded for solo LPs – the band had split by the decade’s end. McLennan and Forster reunited in 2000, but widespread success continued to evade them. Nevertheless, this anthology perfectly encapsulates The Go-Betweens’ irresistible, evergreen and still expanding appeal.