After the Party: the first albums, remastered 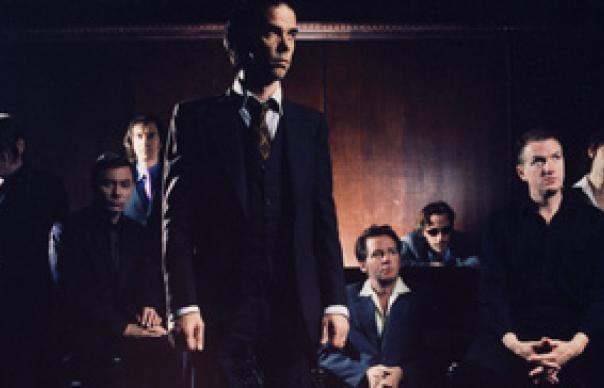 Of all the images that might be said to crystallise the cult of Aussie post-punkists The Birthday Party, one of the most memorable occurred at London’s Electric Ballroom one night in 1983, when Nick Cave introduced “Sonny’s Burning” like a berserk evangelist – “Hands up who wants to die!!” – and 900 arms shot into the air in unison. Utterly Pavlovian (and very funny to watch), it must, all the same, have seemed to Cave like an exercise in shelling peas. Within months, the restless singer was recording ambitious new material in a Shoreditch studio, and his audience would have to adjust to the changes.

If The Birthday Party’s music had been surrealist-meets-sociopathic, the ‘solo’ Cave was anxious to ensure his songs would play like films, not cartoons, in the mind’s eye. He locked away the bats and the big-Jesus-trash-cans, and wrote long, intricate lyrics of great portent and woe (“Saint Huck”, “A Box For Black Paul”), furnishing them sparsely with a bass pattern here, a mournful piano there, and perhaps a few clangs of Blixa Bargeld’s recalcitrant guitar for atmosphere. A sudden upward swoop from Barry Adamson’s bass qualified as a dramatic incident. When Bargeld played his guitar like a machine gun (“From Her To Eternity”) it was clear Cave’s musicians offered everything that his frenzied, claustrophobic wordplay demanded.

An Australian who engaged emotionally with the literature and legend of America’s South, Cave developed an idiosyncratic style, fusing myth, truth, juxtaposition of two or more narratives, and, often as not, Biblical premonition. The epitome of his technique, arguably, is “Tupelo” (on The Firstborn Is Dead), a Mississippi blues moan for the modern era, in which a symbolic thunderstorm heralds the coming of Satan, a terrible flood, the birth of Elvis Presley and the death of his twin – in that order. The writing is vivid, insistent: “In a clap-board shack with a roof of tin/Where the rain came down and leaked within/A young mother frozen on a concrete floor/With a bottle and a box and a cradle of straw.”

Released between 1984 and 1986, these first offerings in Mute’s comprehensive Cave/Bad Seeds reissue campaign have not withstood the passing of 25 years without some collateral damage. An accomplished crooner these days, Cave had a strangulated vocal delivery in the ’80s which rather gets on the nerves now. Pitch-wise, he’s horribly off-target on Leonard Cohen’s “Avalanche” (which opens From Her To Eternity), and other tracks find him unconvincingly scrawny-sounding in places where he badly needs to exert his vocal authority. However, Kicking Against The Pricks (1986), his album of wryly chosen cover versions (“By The Time I Get To Phoenix”? “The Carnival Is Over”!?), surmounts this difficulty and holds the listener in a persuasive grip, mainly because Cave isn’t just singing these songs, he’s overseeing their reconstruction from scratch. In a world where we’re used to the covers album as a mid-career holding strategy, it’s important to note that Cave’s was among the least deferential and most risk-taking. In its most outrageous triumph, the Bad Seeds do to Jimi Hendrix’s “Hey Joe” what Hendrix did to Dylan’s “All Along The Watchtower”.

Just as there was always more to Cave than splatter-painting in Bedlam, there was more to the Bad Seeds than a backing band. Seeking innovative sound-collisions, they assembled in odd configurations of two and three, rarely forming into an orthodox line-up. Your Funeral, My Trial (1986), the stand-out album from this batch, and a pig to record, was a minor miracle of Bad Seeds ingenuity and dedication (notably from long-serving multi-instrumentalist Mick Harvey, who recently announced his departure from the band). Cave had a debilitating heroin habit, and at times sounds lost in the clouds, even as his churchy Hammond organ lends a near-religious grief to the melodies. By contrast, the album’s violent second half (it was released on vinyl as two 12-inch EPs) sees Cave metaphorically slapped awake by his captors and dragged before a firing squad. The climactic “Long Time Man” (a Tim Rose song) is surely the howl of a cornered animal, in both art and life.

All four of these albums are available as remastered CDs (sounding significantly sharper than before) with original tracklistings and no extras. Alternatively, they come in Collectors’ Editions with a DVD of bonus tracks (singles, b-sides, etc), plus a 5.1 surround sound album remix and a 40-minute film. Having scientifically tested “Tupelo” and “Stranger Than Kindness” in 5.1, it’s uncanny how the format suits the Bad Seeds’ cinematic-style arrangements. No less impressive are the films by Iain Forsyth and Jane Pollard (Do You Love Me Like I Love You, parts 1–4). Cave’s musicians, friends, fans and ex-associates are edited into a seamless flow, looking directly into the camera and telling their stories with no interruptions, captions or music. Even a Cave sceptic might find the effect thoroughly hypnotic.