Four songs with rock in the title. . . Business as usual? Not quite. 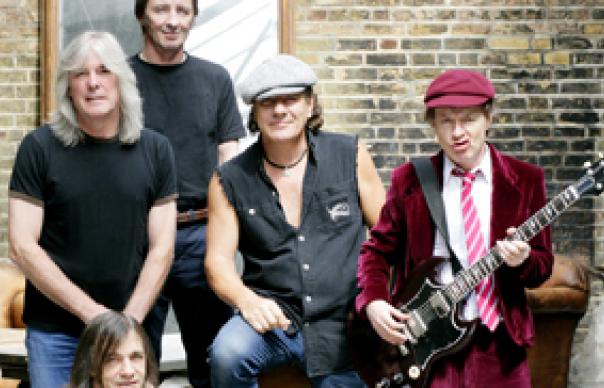 Although Brian Johnson has been playing the dirty old man for nigh on three decades, he may be entitled, finally, to act his age. The last time AC/DC released an album, Stiff Upper Lip, Johnson was a lubricious 52. When Black Ice finally goes on sale, the singer will have just turned 61. In the interim, Johnson – a man who models himself on Andy Capp, you’ll remember, but without that cartoon character’s emotional depths – has purportedly been working on a musical about Helen Of Troy with some chums from his neighbourhood ballet company in Florida. It’s hard to think of a band who’ve previously denied the existence of their sensitive side quite as vigorously as AC/DC. And yet, buried in the preposterous sturm und drang of this, their 15th album, there does seem to be the vaguest intimations of mortality.

We’re not talking about a Time Out Of Mind, a Dear Heather or a Prairie Wind, obviously. But with “Rock’n’Roll Dream”, AC/DC attempt what most of their fans have dreaded for years: something perilously close to a ballad. Here, we find Johnson describing a dream he’s had, which seems to involve “deep water” and “pretty women”. At one point, he exclaims, “And it could be the very last time!” in a tone which is not tremendously different from his usual priapic rasp, but which we’ll choose to interpret as “agonised”. The chorus – delivered as a brisk antidote to the mimsy verse which precedes it – finds him musing, “I could be in a rock’n’roll dream”. On the surface, yet another cliché from a band whose lyrical vocabulary is not much bigger than the number of chords they use. But is this AC/DC admitting, more or less, that their world of endless boogies and Donald McGill seduction techniques might not be entirely realistic? Is this, after 35 years, evidence of a band – whose 55-year-old guitarist still wears the uniform of a mildly sadistic prep school, for Christ’s sake – finally growing up?

Well, not really. “Rock’n’Roll Dream” isn’t a particularly good song, but it does highlight the struggle which takes place within the 55 and a half minutes of Black Ice: a struggle between a band whose superhumanly reductive take on rock’n’roll has evolved less than any other band extant; and one who somehow, in 2008, have decided that maybe they should develop their sound. A bit. To this end, the producer is Brendan O’Brien, who’s recently been found buffing up Bruce Springsteen for 21st Century American radio.

As Black Ice begins, with the straightforwardly excellent “Rock’n’Roll Train”, it seems O’Brien has been hired to reproduce the elemental thud of AC/DC’s early ‘80s pomp – something more monolithic than the enjoyably rapacious blues-rock of 2000’s Stiff Upper Lip. Soon, though, O’Brien’s task seems larger – and doubtless, to plenty of AC/DC loyalists, more sinister.
The next three songs seem positioned as a challenge to AC/DC orthodoxies. “Skies On Fire” and “Big Jack” will not, admittedly, appear that different to casual listeners. But there’s a tangible softening and thickening to Angus and Malcolm Young’s guitar tones, a harmonious tweak to the blokey choruses, a plushness which contrasts with the stark precision of old and which, fleetingly, is reminiscent of U2. “Anything Goes”, meanwhile, is a flaming pop song, of all things, with Johnson singing lustily within his range rather than screeching. It calls to mind “Gloria” by Laura Branigan.

Elsewhere, O’Brien’s fastidious touch complements rather better the band’s drilled crispness. On “Black Ice” itself, O’Brien marshals a sort of militarised hysteria, built around Malcolm Young’s dogged tracking of the rhythm section. “She Likes Rock’n’Roll” is great, too, with one of those stuttering morse code riffs that’ll be eternally compared with “Back In Black”.

“Stormy May Day” presents another departure, with the main riff played on a slide guitar, and a general air that suggests the only other band the Young brothers do not hold in utter contempt – perhaps the only other band they’ve ever even heard – is Led Zeppelin. That comes through again on “Money Made”, a swaggering chain gang chant with the distinct heft of “When The Levee Breaks”. Less impressively, O’Brien seems to have chiselled the grit out of Johnson’s vocals on the aforementioned “Rock’n’Roll Dream”. Minus the gargled cinders, he sounds uncannily like Robert Plant. Which is not, perhaps, quite what we want from Brian Johnson and AC/DC.

Fiendish calculation is part of their charm; only The Rolling Stones, perhaps, manage their own brand with such single-minded focus. AC/DC’s legend is based on a heroic conservatism, and when the Black Ice tour sets off later this month, it’s a fair bet that the same old setlist will be dusted down one more time, to doubtless ecstatic responses. But if Black Ice has a weakness, it’s that it betrays an anxiety. As if AC/DC really might be uncharacteristically worried that their grasp on the planet is in danger of slipping. As if they’ve tried to discreetly update their sound, while hoping that their rebarbative old fans won’t notice what they’ve done. Invincibility suits AC/DC. Self-doubt, even a microscopic hint of it, does not.