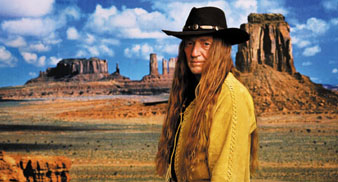 Willie Nelson has joined up with the legendary instrumentalist Wynton Marsalis to cover a variety of jazz, blues and country classics on his new DVD Live From New York City.

Filmed over two nights in January 2007 at New York’s Lincoln Center, the show sees the two collaborate on Willie Nelson originals, traditional songs and standards by the likes of Hoagy Carmichael, Jimmy Reed and Duke Ellington.

Collectively, Willie Nelson and Wynton Marsalis are holders of nine Grammy Awards and a Pullitzer Prize For Music

‘Rainy Day Blues’
‘Georgia On My Mind’
‘Bright Lights, Big City’
‘Basin Street Blues’
‘Caldonia’
‘Night Life’
‘Stardust’
‘My Bucket’s Got A Hole In It’
‘Ain’t Nobody’s Business’
‘Don’t Get Around Much Anymore’
‘Sweet Georgia Brown’
‘That’s All’
‘Down By The Riverside’

The DVD will be released September 29.