Jack and Meg return to give us another thumping 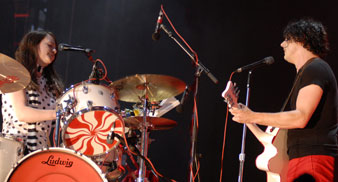 The White Stripes have announced that they will be returning to the UK later this year for another outing of their latest album ‘Icky Thump.’

The eight arena shows which kick off on October 24 at Glasgow SECC will be the duo’s largest nationwide tour yet.

Jack and Meg recently played a triumphant headlining set at London and Leed’s Wireless festivals – where they premiered their latest album ‘Icky Thump’ to a live UK audience.

The Autumn/ Winter arena dates are as follows; tickets go on sale this Friday, July 13 at 12noon.