Starring Kate Bush, Springsteen, Dylan, Siouxsie, The Jam and Tammy Wynette: "It is a time for odd fits." 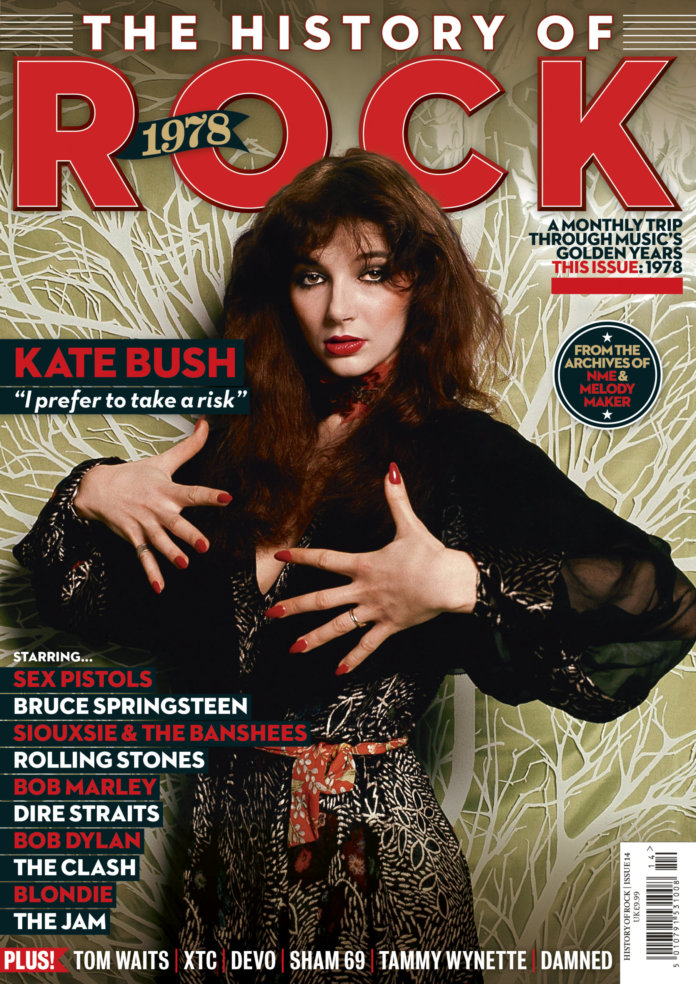 A landmark week for publishing, I think: when was the last time a magazine appeared in UK newsagents with Kate Bush, Tammy Wynette and Sham 69 on the cover? Not to mention Dylan, Earth Wind & Fire, Bruce, Siouxsie, Bob Marley, the Pistols, the Stones, Magazine, The Clash, The Jam, XTC, Devo, Tom Waits, Johnny Thunders and Dire Straits (not together).

This, of course, is how The History Of Rock 1978 shapes up. Kate’s on the cover, and you can order a copy from our online shop. It’s a great issue: here’s John Robinson to fill you in on the details…

“Welcome to 1978. After the revolutions of the past year or so, this is a year where in music’s war-torn landscape, reconstruction, of a kind, begins. There are survivors of punk’s revolution – Bob Marley, The Clash, and John Lydon to name three – but others aren’t so lucky. Bands like the Damned, Television and the Sex Pistols break up. Sid Vicious ends the year in a foreign jail.

“Long before this, NME’s Charles Shaar Murray meets Howard Devoto and decrees Magazine one of the best of the ‘post-punk’ bands. Nearly 40 years on, we have come to think of post-punk as a genre – here, though, its liberated values and policy-driven music have yet to coalesce into anything so formal

“Instead there are new bands – among them XTC, Pere Ubu, X-Ray Spex, Devo, the Slits, and Siouxsie And The Banshees – who have taken punk as a starting point, a means to their own end. Among the artists of the ‘new wave’ (as everyone is calling it) our cover star Kate Bush, being a more mystical and theatrical figure, is an odd fit. Still, in 1978 her records convincingly slug it out with the Bee Gees in the top ten. It is a time for odd fits.

“This is the world of The History Of Rock, a monthly magazine which follows each turn of the rock revolution. Whether in sleazy dive or huge arena, passionate and increasingly stylish contemporary reporters were there to chronicle events. This publication reaps the benefits of their understanding for the reader decades later, one year at a time.  Missed one? You can find out how to rectify that by visiting our online shop and picking up a back issue.

“In the pages of this fourteenth edition, dedicated to 1978, you will find verbatim articles from frontline staffers, filed from the thick of the action, wherever it may be. Backstage with Bruce Springsteen. Discussing Charles Manson with Siouxsie Sioux. In Riker’s Island with Sid Vicious.

“Sid protests his innocence. Even if no one believes him, at least someone is there to give him a fair hearing.”