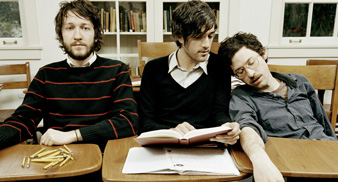 We Are Scientists have today (August 30) announced a full UK tour starting this November.

The US dance-rock band, who played to packed NME/Radio 1 tents at the Carling Reading and Leeds festivals last weekend, will now return to the UK for a further 20-dates.

We Are Scientist’s third album, the follow-up to 2005’s ‘With Love And Squalor‘ is due to be released in January, and Keith Murray and co. are expected to preview some of their new material live on tour.

More details and fun band stuff is available from the We Are Scientists official website here.

We Are Scientists play the following venues this Winter: