If you've not already seen it, I hope you enjoy this a clip from Bill Murray's latest film, St Vincent. It's from the closing credits to the film - don't worry, there's no spoilers - which feature Murray's character, Vincent, lounging in his yard, listening to an old Sony Walkman and singing along to Dylan’s “Shelter From The Storm”. Bill sings Bob, indeed. 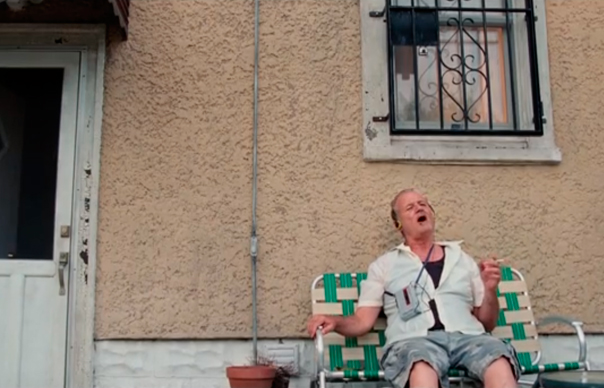 If you’ve not already seen it, I hope you enjoy this a clip from Bill Murray‘s latest film, St Vincent. It’s from the closing credits to the film – don’t worry, there’s no spoilers – which feature Murray’s character, Vincent, lounging in his yard, listening to an old Sony Walkman and singing along to Dylan’s “Shelter From The Storm”. Bill sings Bob, indeed.

Incidentally, I don’t think this has much to do with the works of Annie Clark, the other St Vincent. Here, Murray plays – guess what? – a curmudgeonly alcoholic who offers to babysit his neigbhour’s twelve-year-old boy to raise gambling money.


Astonishingly, it’s Murray’s first lead role in ten years – unless you count his voice talents in Garfield 2. Even more astonishing are the lengths director Theodore Melfi went through to secure the actor’s involvement in the film. According to an interview for USA Today, Melfi said, “The nuts and bolts is (Murray) has no agent and manager, as everyone knows. You just call the 1-800 number. And I left, I don’t know, a dozen messages. It’s not his voice on there. It’s a Skytel voicemail with a menu. You have to record the message and send the message. It’s so confusing. I think if you can get through that and believe in it, he might call you back.

“So I finally call his lawyer, it must have been at least six weeks later after all these messages. (The lawyer suggests Melfi write Murray a snail mail letter.) A ‘Dear Bill’ letter. To a post office box back in New York. Two weeks later, (Murray) calls his attorney and goes, ‘OK the letter was swell. I’d like to read the script. Have him snail mail a script.’ To another post office box on Martha’s Vineyard. Bill is a nomad. He’s never in one place for long.

“And so we snail-mailed a script. Bill calls two weeks later, he picks up the phone and calls my producer’s assistant (who is flabbergasted) and says, ‘I never got that script.’ So we Fed Ex the script to a place in North Carolina. Two or three weeks after that, driving down the road I’m in the middle of a commercial job and my phone rings and he goes, ‘Ted? It’s Bill Murray. Is this a good time?’

Anyway, St Vincent opens in the UK in December.