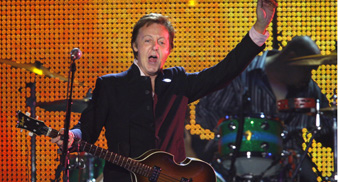 The final tracklisting for the forthcoming War Child ‘Heroes’ album has been confirmed and artists that feature on the album include Elbow, Beck, Franz Ferdinand and the Hold Steady amongst others.

Each artist has covered songs by their own heroes, so Beck has recorded Bob Dylan‘s “Leopard-Skin Pill-Box Hat”, Hot Chip have done Joy Division‘s “Transmission”, Elbow have covered U2‘s “Running To Stand Still” and The Hold Steady have gone for Bruce Springsteen‘s “Atlantic City”.

The full list of artists and songs are listed below. All proceeds from the album, which is released through Parlophone on February 16, will go to the War Child charity, for childern who live with the effects of war.

Sir Paul McCartney has said: “I have been supporting War Child since 1995. Their work with children in war zones saves lives and their work with those who take decisions that help them to do something about it saves even more lives. The breadth of talent on this project is amazing; it’s great that so many people gave their time, energy and support to this initiative. I urge everyone to support War Child.”

Elbow singer Guy Garvey has also commented: “War Child do exactly what it says on the tin. These kids shouldn’t be in such circumstances in the first place, but they are, so thank god someone’s doing something about it.”

The tracklist in full: