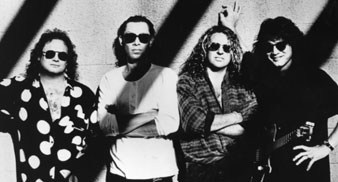 US rock veterans Van Halen have announced that they will regroup for a 40-date North American tour this summer.

Even the group’s original singer David Lee Roth has returned to the band, for the first time officially since 1984.

In a statement on van-halen.com, the group have promised a greatest hits tour, “featuring a set list of the most iconic hits ever produced by America’s premiere rock band”.

Guitarist and founder Eddie Van Halen has also stated his joy at the band’s official reunion, saying, “I am very excited to get back to the core of what made Van Halen.”

The band are notorious for changing their vocalist. They have recorded studio albums with three different singers since 1978 – Roth, Sammy Hagar and Gary Cherone – and each of them have left the group under murky circumstances only to return, at least once, over the last two decades.

Van Halen had their most successful era between 1978 and 1984, with the vocal talents of Roth. Monster hits include the anthemic “Jump”, “Why Can’t This Be Love?” and “Runnin With The Devil.” The group also pioneered several new techniques in playing and recording guitar sounds.

Van Halen himself has also confirmed that Wolfgang, his 15-year old son, is now the band’s bassist, replacing the departing Michael Anthony.

Details for the extensive tour will be made available soon. Currently it is unclear if Van Halen will play any dates in Europe.

Their reunion tour is anticipated to be one of the most in-demand of the year, alongside tours from Genesis and The Police.

Van Halen are due to be inducted into the Rock and Roll Hall of Fame on March 12.