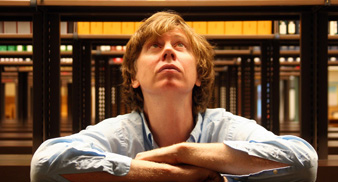 The 60-minute film, titled “Extra Action (And Extra Hardcore)”, is released on DVD on March 18, and features original music from the Sonic Youth guitarist.

Kern has collaborated with Moore in the past, directing the gory video for Sonic Youth‘s 1984 single “Death Valley ‘69” and supplying the cover image for their 1986 album “Evol”, which was taken from Kern’s film “Submit To Me Now”.

The book features oral and photographic accounts of the burgeoning avant-garde scene in New York that featured bands including Teenage Jesus & The Jerks, James Chance & The Contortions and Mars.

The No Wave scene was a significant influence on Sonic Youth in their early days.