Björk, Deep Purple, Chrissie Hynde and Nick Cave are all in the new issue 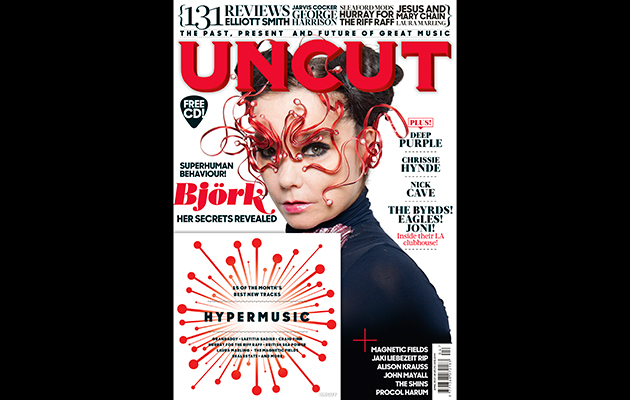 Björk, Deep Purple, Chrissie Hynde and Nick Cave all feature in the new issue of Uncut, dated April 2017 and on sale now.

Björk is on the cover, and inside the issue her closest collaborators reveal the secrets behind her greatest albums. “It was like standing next to a volcano,” says Anohni. “I couldn’t keep up.”

While warming up for a final tour and album, Deep Purple’s Ian Gillan, Roger Glover and Ian Paice recall their wild career in rock, while Chrissie Hynde reveals all about the Pretenders, the ideal candidate to take on Donald Trump and dinner with Morrissey.

Uncut catches Nick Cave & The Bad Seeds in Australia to hear them perform Skeleton Tree live in Warren Ellis’ hometown, while The Magnetic Fields‘ self-confessed “megalomaniac” Stephin Merritt discusses his autobiographical, epic album, 50 Song Memoir: “It should serve as a warning to everyone not to do confessional songwriting.”

We also look at the story of Los Angeles’ Troubadour club – how The Byrds, Joni Mitchell, Carole King, Elton John and the Eagles made an old Hollywood car showroom the clubhouse for a host of musical superstars.

Alison Krauss takes us through the finest albums of her career, while The Creation look back on their freakbeat classic “Making Time”.

In our mammoth reviews section, we look at new albums from Hurray For The Riff Raff, Jarvis Cocker, Laura Marling, Sleaford Mods, Spoon and The Jesus And Mary Chain, and archival releases from Elliott Smith, George Harrison and more.