Bob Dylan, The Jesus And Mary Chain, Genesis and Sharon Van Etten all feature in the new issue of Uncut, dated December 2014 (Take 211) and out tomorrow (October 28). 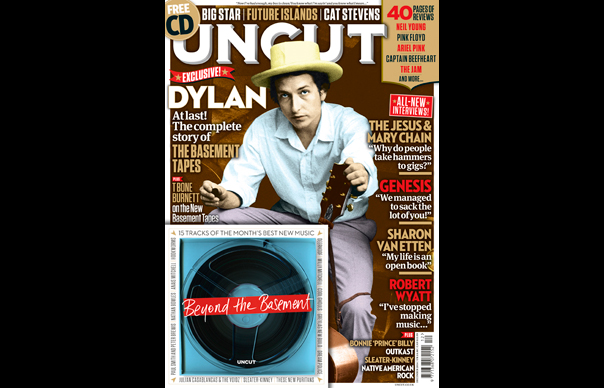 Bob Dylan, The Jesus And Mary Chain, Genesis and Sharon Van Etten all feature in the new issue of Uncut, dated December 2014 (Take 211) and out tomorrow (October 28).

In our cover feature, on the eve of the complete Basement Tapes’ release, renowned Dylan scholar Clinton Heylin takes an in-depth look at the fascinating period in the late-’60s when Dylan wrote and recorded with The Band and recuperated from his motorcycle accident and the pressures of fame.

While bootlegs of The Basement Tapes have compiled over 100 of the tracks recorded, the forthcoming official Basement Tapes Complete is the first time that all 138 recordings have seen release – Heylin charts the incredible effort that has gone into the recovery of many of these tracks.

William and Jim Reid look back over the early years of The Jesus And Mary Chain, as they prepare to perform Psychocandy in full to celebrate their debut’s 30th anniversary.

The brothers discuss riotous gigs, startling records, leather trousers, animosities and a musical revolution born out of white noise. “We don’t punch each other in the face anymore. But it’s pretty intense,” says William.

Also in the Big Apple, Sharon Van Etten lets us into her Manhattan apartment to discuss love, loss, being the “female Conor Oberst” and her most recent album, Are We There.

Elsewhere, Robert Wyatt reveals that he’s stopped making music and explains why, along with talking us through his long career, record by record, from Soft Machine and Matching Mole to 2007’s solo Comicopera.

Drummer Jody Stephens, producer John Fry and engineer Richard Rosebrough reveal how they created Big Star’s powerpop gem, “September Gurls”, Slade influence and all, while Bonnie ‘Prince’ Billy, aka Will Oldham, takes us through eight records that have soundtracked his life, including The Fall and Don Williams.

Yusuf, formerly known as Cat Stevens, answers your questions about his upbringing, his new album and touring with Jimi Hendrix and The Walker Brothers, while Future Islands reflect on their sudden success and their desire to do things “the old-fashioned way and blow people’s minds!”

In our 40-page reviews section, we take a look at new releases from Pink Floyd, Neil Young, Ariel Pink, Bryan Ferry and Thompson, as well as reissues from Captain Beefheart, The Jam, Sleater-Kinney and more.

Outkast, Belle And Sebastian, Lauryn Hill and the George Harrison tribute George Fest are all reviewed in our live section, along with films including the Dexys doc Nowhere Is Home, The Drop, The Grandmaster and Gone Girl.

The new issue also features a free CD, Beyond The Basement, which includes tracks from Julian Casablancas + The Voidz, Sleater-Kinney, Deerhoof, These New Puritans and Anaïs Mitchell.