The Smiths, The War On Drugs, Kraftwerk and Bob Dylan all feature in the new issue of Uncut, dated March 2015, and out tomorrow (January 27). 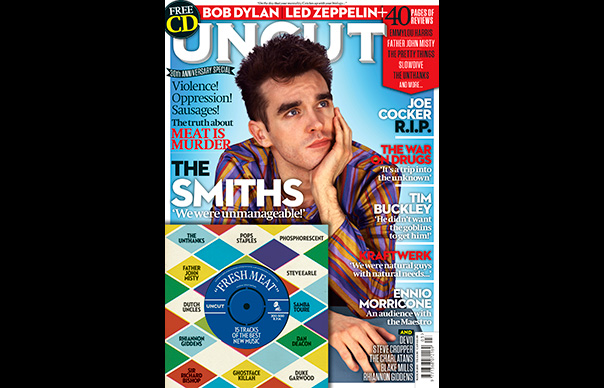 The Smiths, The War On Drugs, Kraftwerk and Bob Dylan all feature in the new issue of Uncut, dated March 2015, and out tomorrow (January 27).

Morrissey is on the front cover, and inside we celebrate the 30th anniversary of Meat Is Murder with an in-depth, inside look at the making of the record.

With help from band members, close associates and contemporaries – even Neil Kinnock – we learn about awkward moments in Little Chefs, car races with OMD and the use of sausages as an offensive weapon… “We were unmanageable!”

Adam Granduciel discusses The War On Drugs’ 2014, a rollercoaster of a year which saw their third album, Lost In The Dream, achieve huge acclaim. The frontman even looks forward to the band’s next album, and finally talks at length about the little matter of Mark Kozelek…

Elsewhere, Kraftwerk members and associates tell the full story of Autobahn, a record that changed the world’s idea of Germany and revolutionised electronic music.

Bob Dylan’s Shadows In The Night, a collection of Frank Sinatra covers, gets the full Uncut analysis in our reviews section, while we also look at Sinatra’s dealings with rock, a genre he once called “brutal, ugly, degenerate, vicious…”

Also in the issue, Allan Jones pays tribute to the late Joe Cocker, we examine Tim Buckley’s overlooked final years, and put your questions to the master of soundtracks, Ennio Morricone, who discusses Sergio Leone, Quentin Tarantino and Morrissey.

Steve Cropper takes us through 10 of the greatest songs he played on and co-wrote – from Stax cuts from Wilson Pickett, Otis Redding and Booker T & The MG’s, to later work with John Lennon, Big Star, Neil Young and the Blues Brothers – while Phosphorescent’s Matthew Houck reveals eight records that have soundtracked his life.

Tim Burgess recalls The Charlatans’ storied career in our ‘album by album’ piece this month, while Devo describe the inspirations behind their gleefully warped classic, Jocko Homo – from witnessing the tragic Kent State shootings to jamming with David Bowie in Cologne…

This month’s 40-page reviews section includes Dylan, Led Zeppelin, Emmylou Harris, Slowdive, Father John Misty, The Pretty Things, The Pop Group, The Unthanks and more, while the Instant Karma section at the front of the magazine features Clive Langer, Man and Blake Mills, among others.