The Ramones, the Small Faces, Neil Young and Stephen Malkmus all feature in the new issue of Uncut, dated March 2014 and out now. 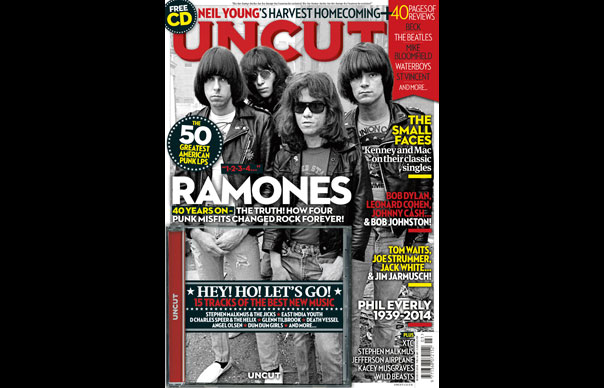 The Ramones, the Small Faces, Neil Young and Stephen Malkmus all feature in the new issue of Uncut, dated March 2014 and out now.

Surviving members, collaborators and friends piece together the complete story of the Ramones – how the four weirdest kids in New York revolutionised rock’n’roll.

“I lost touch with reality,” explains drummer Tommy Erdelyi. “I was in Ramones world, not the normal world…”

Ian McLagan and Kenney Jones of the Small Faces recall the creation of all their classic singles, from “Whatcha Gonna Do About It?” to “Afterglow (Of Your Love)”.

We review Neil Young’s surprisingly hit-heavy set at Toronto’s Massey Hall and hook up with Stephen Malkmus & The Jicks to discuss their new album Wig Out At Jagbags, life in Berlin, playing indie-rock in your forties and deciding which decade is the best for music.

We chart the 50 greatest American punk LPs, from Hüsker Dü to the Big Boys, while darlings of the ’60s psychedelic counter-culture, Jefferson Airplane, take us through their catalogue, album by album.

Neneh Cherry reveals the eight records that have most shaped her life, while, in our 40-page reviews section, we take a look at releases from Beck, The Beatles, Mike Bloomfield, St Vincent and Benmont Tench. As well as Neil Young at Massey Hall, we also catch The Waterboys and Cass McCombs live, and review new films and DVDs including Dallas Buyers Club, Only Lovers Left Alive and Parks And Recreation.

The new issue of Uncut is out today (January 31).