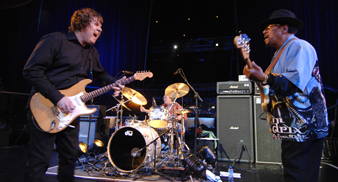 Left-handed guitarist Gary Moore kicked off the concert with the classic ‘Purple Haze’ backed by Mooney and Bronze. That combination powered through seven tracks including ‘Foxy Lady’ and ‘Angel’.

After ‘Fire’, Mooney and Broze left the stage to make way for Mitch Mitchell and Billy Cox (pictured above) to come on and play three tracks – including an amazing ‘Hey Joe’. The pair were originally part of the original Band Of Gypsys Woodstock festival line-up.

Bronze and Mooney then returned to jam with Moore for a blistering fifteen minute ‘Voodoo Chile’.

The special launch evening had started with an introduction by former NME writer Keith Altham telling anecdotes about his experience of the Monterey International Pop Festival and a screening of the film to the packed house.

‘Jimi Hendrix Live at Monterey: The Definitive Edition’ celebrating the 40th anniversary of Hendrix’s debut at the legendary Monterey Pop Festival is released next Monday (October 29).

For more details about the film, check out:www.hendrixatmonterey.com