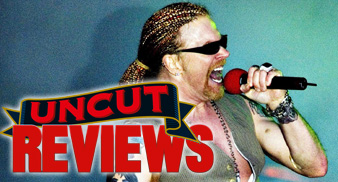 
In their heyday, Guns N’ Roses were remarkable for their ability to ride catastrophe. Following Use Your Illusion I and II, however, in 1991, huge fissures developed in the band, which even they couldn’t endure. One by one, the original band members left, most fatefully guitarist Slash, apparently unable to endure the “dictatorial” tendencies of singer Axl Rose.

Work on this, their first album proper since then, actually began in the mid-90s. However, it’s been made in such fits and starts, with such a liquid line-up (even Brian May dropped in at one point) that it would be a miracle of Sistine proportions if it amounted to anything coherent and consistent.
Such worries are, sadly, not without foundation. Soundwise, Chinese Democracy is all over the place. Tracks actually vary in volume according to their disparate ages, with the likes of “I.R.S.” (around on bootleg for years) quite clearly having been cut and finished years before the track that precedes it.

A similarly tangled story accompanies the music. Chinese Democracy is evidently the work of a man becoming progressively more interested in avant-rock forms: virtually every track on Chinese Democracy starts out sounding like it might amount to something that extends GNR’s parameters in truly unexpected directions (noir-ish ambient, electronic, even brass band on “Madagascar”). However, Rose’s experimental hankerings generally give out after about 10 seconds. Oh Slash, where art thou?

Scouring the album for redeeming moments, one could cite the steely, futurist angst of “Shackler’s Revenge” and the pianistic “This I Love”, which in making Elton John and Freddie Mercury sound like Chas N’ Dave, must at least merit some kind of high camp award. And in “Prostitute” Rose offers a hint of atonement which excites fleeting sympathy. What kind of surreal pass has your life come to, after all, when you get involved in a fistfight with Tommy Hilfiger?
With rumours that the original G N’R are set to reform next year, and mega metal currently in the ascendancy, the insanity looks set to carry on regardless.

A full review of Guns N’ Roses’s Chinese Democracy will run in the next issue of Uncut, on sale November 27.