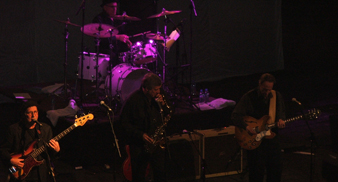 Playing the first of two headlning shows as part of Le Beat Bespoke4 organised weekend, the Seattle band played a set comprised of tracks from their 1965 debut ‘Here Come The Sonics’, ‘Boom’ as well as a selection of classic rock standards.

The band reunited for the first time since a one-off gig in 1972 now comprises original members Gerry Roslie, Larry Parypa, Rob Lind as well as The Wailers’ Ricky Lynn Johnson on drums and Don Wilhelm of The Daily Flash.

Each song was introduced with a preamble of which album it was from, and what it was about, the first time anyone in the crowd has ever interacted with the band live.

The sell-out crowd went wild for ‘Psycho’, ‘Strychnine’ and ‘The Witch’, though the the biggest crowd pleaser was an amazing rendition of the classic ‘Louie Louie.’

Outside the venue rockabilly kids with quiffed hair hung around mby their vinatge cars in stacked shoes, last night the Sonics did a fantastic of bringing their 60s cars, guitars and girls vibe, finally, to the UK.

The Sonics play again tomorrow Sunday March 23. They are supported by Pete Doherty and The Horrors.