The return of the mighty Stooges! 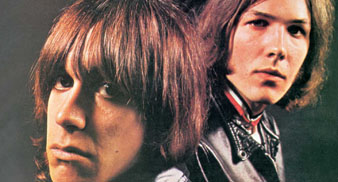 The Stooges are back in the studio recording their first full album in 33 years, with Steve Albini at the controls.

Original Stooges Iggy Pop, Ron Asheton, Scott Asheton and Steve Mackay re-united in 2003 for a handful of live concerts, which were incredibly successful.

Now joined by Mike Watt, also bassist with The Minutemen, The Stooges are back in the studio, and making a racket by accounts. Watt has been excitedly writing a blog about his experiences recording with the legendary Detroit proto-punks.

He says it’s a tough learning experience, with Iggy writing and arranging everything. “A big part of my apprenticeship w/the stooges is learning restraint. I mean it’s way tough but I’m even more way into learning it.”

Watt also talks about how the rehearsals have been going – they’ve rehearsed 15 tracks for the forthcoming album. Titles mentioned in the blog start with the album’s first track, “Trollin,” for which Iggy is “singing out of a fender twin reverb amp.”

Other named tracks include “Greedy Awful People,” “I Wanna Be Your Man” (the track written by Lennon & McCartney for the Stones), “Sounds of Leather,” “Claustrophobia,” “Free and Freaky In The USA,” I’m Fried,” “I Won’t Pay,” “My Idea Of Fun,” “The Weirdness,” “She Took My Money” and “Mexican Guy.”

There is even talk of Iggy getting cool “cat” Brendan Benson of The Raconteurs to play guitar on a couple of tracks including one called “End Of Christianity”.

To get the daily gossip from the studio, check out Mike Watt’s blog at
http://hootpage.com/hoot_wattstooges2006record.html