The 30th anniversary jaunt was captured on film 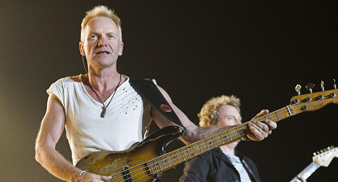 The Police are to release a live concert film “Certifiable” from their recent 30th anniversary reunion tour in November.

Recorded at Sting and co’s Buenos Aires show, the concert film has been directed by Ann Kim and Jim Gable, whose previous credits include the Rolling Stones.

The entire Police concert clocks in at 109 mins and includes all of the bands global hits. A 50 minute bonus documentary “Better Than Therapy,” detailing the band’s reunion tour is also included.

The live release will be the first major music title available from Universal on the new Blu-ray format.

Out on November 24, Certifiable will also be available as a deluxe CD/DVD set.

‘The Police: Certifiable’ track listing is:

Message In A Bottle
Synchronicity II
Walking On The Moon
Voices Inside My Head / When The World Is Running Down
Don’t Stand So Close To Me
Driven To Tears
Hole In My Life
Truth Hits Everybody
Every Little Thing She Does Is Magic
Wrapped Around Your Finger
De Do Do Do, De Da Da Da
Invisible Sun
Walking in Your Footsteps
Can’t Stand Losing You/Regatta De Blanc
Roxanne
King Of Pain
So Lonely
Every Breath You Take
Next To You