The Killers To Headline Oxygen And T In The Park 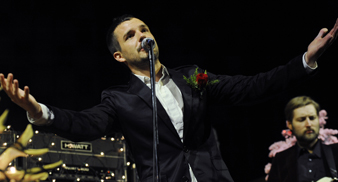 The Killers have been announced as headliners for the Oxygen and T In The Park festivals.

Both Oxygen and T In The Park take place between July 10 -12. Other acts confirmed to play both festivals include Kings of Leon, Snow Patrol, Blur, Razorlight, Nick Cave and the Bad Seeds, Pete Doherty, Elbow, Yeah Yeah Yeahs and White Lies.

Oxygen will be held at Punchestown Racecourse, County Kildare, while T In The Park is taking place outside Kinross in Scotland.

Meanwhile, The Killers are to to perform an intimate gig at London’s newly renamed O2 Shepherd’s Bush Empire in aid of War Child tonight (February 18) – co-headlining with Coldplay.