Brandon Flowers soldiers on despite plagued by sound issues 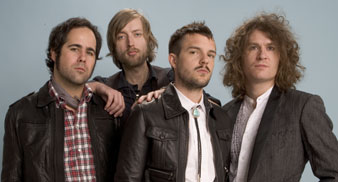 The Killers, beset by sound volume problems similar to their ill-fated Glastonbury set last year, won the crowd at Reading Festival over tonight (August 23) with a set packed with their hits, plus they covered Joy Division‘s “Shadowplay” early on.

The performance only included one new song from their forthcoming new album, “Spaceman”, filling the set with hits from their previous two albums plus the B-sides collection, Sawdust.

The band kicked off their headline show with “For Reasons Unknown” with chants from the audience to “turn it up”, which continued throughout the show. Barely audible for at least the first six tracks, the band was led by a dapper waist-coated Brandon Flowers. He soldiered through with an angered face at first before hitting his stride to carry the show.

“When You Were Young” saw the first glitter bombs of the night set off as the song closed, with the crowd awed, despite still singing louder than the sound coming from the stage.

Brandon Flowers played an inspired version of “Sam’s Town” sat behind the fairy-lit piano, accompanied with their new violinist/keyboardist.

Playing five tracks from Hot Fuss, six from Sam’s Town and four from Sawdust, The Killers won over the Reading Festival crowd.

For Reasons Unknown
Somebody Told Me
Shadowplay
Sweet Talk
Bones
Smile Like You Mean It
Tranquilize
When You Were Young
Under The Gun
Sam’s Town
Read My Mind
Spaceman
Mr Brightside
Encore:
Jenny Was A Friend Of Mine
This River Is Wild
All These Things That I’ve Done