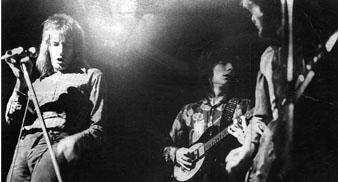 Red Hot Chili Peppers‘ Flea has joined the reunited Faces to help the group complete their first album in over three decades.

Speaking to the Daily Mirror at the South Bank Awards earlier this week, Ronnie Wood has confirmed that the RHCP’s bassist will join The Faces for their reunion tour, and that they have completed their first album since ‘Ooh La La’ was released in 1973.

Wood also revealed that the new material was written during a trip abroad he and Rod Stewart took over Christmas.

The Mirror reports that Wood and the band’s frontman Rod Stewart visited Costa Rica, Bermuda and Miami to get inspiration, and then wrote the album’s songs in three days.