Ted Nugent’s Got A Hunting Guitar 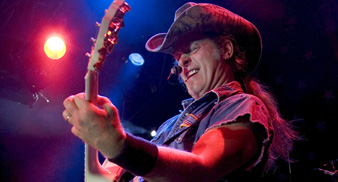 Ted Nugent, the famous Detroit hard rocker, has gone one step further than anyone else in his quest to be a pro-hunter. He’s had his fantasy guitar made – one that doubles up as a high-caliber Derringer handgun.

The instrument was built to order by Ed Roman’s Quiksilver Guitars in Las Vegas for the renowned hunter.

Ted Nugent, famous for songs such as “Dog Eat Dog” and “Cat Scatch Fever”, is also a board member of America’s National Rifle Association.

Speaking his extremist views at the group’s National Convention last year, Nugent said, “I want the bad guys dead. No court case. No parole. No early release. I want ‘em dead. Get a gun and when they attack you, shoot ‘em.”

Nugent describes his new precision firearm/guitar as “a work of art; it’s absolutely magnificent. What a concept.”

It remains to be seen if he’ll be brandishing his weapon live on stage.

Rather worryingly, Ed Roman, founder of Ed Roman’s Guitars, has said: “As usual, Ted will kill audiences with his hot finger work, but now he can employ his expert marksmanship with a six string, as well.”