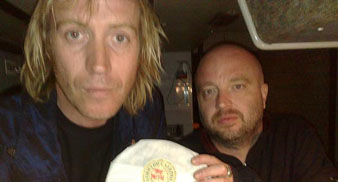 Super Furry Animals and Rhys Ifans played a special gig with their band The Peth last night, debuting material from their forthcoming album ‘The Golden Mile’, due for release in September.

It was the first London gig for the group, which counts the Notting Hill actor and Guto Pryce and Dafydd Ieuan, the bassist and drummer from the Super Furry Animals amongst its members.

The band opened with ‘Shoot on Sight’ and worked through a set of ten songs from their debut album with Ieuan coming out from behind the kit to play lead guitar, not a position he feels entirely comfortable with.

“I only started playing guitar standing up last week,” said Ieuan who started the band as a side project in 2006 as an excuse for the band members to spend time together in the studio.

Ifans was the original vocalist in Super Furry Animals prior to departing the band to focus on his acting career.

The album was recorded sporadically over a two year period and tells of locations, characters and personal tales in a mile long stretch between the studio and the Grangetown area of Cardiff.

According to Ifans everything needed to ‘sustain’ the recording was available on this stretch of road he dubbed The Golden Mile.

The Peth, which means ‘the thing’ in English, will play Green Man festival on August 17.