An Uncut artist of the year likes scary movies 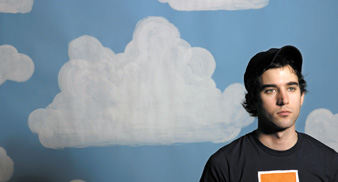 Hugely talented musician Sufjan Stevens, who famously promised to write an album for all 50 American states and whose album “Come On Feel The Illinoise” was released to great acclaim last year, has taken on yet another role.

In celebration of Halloween this week, the singer has spoken about what films he loves at this time of the year.

Posting on his record label’s website www.asthmatickitty.com, Stevens explains his love of the horror genre.

He explains, “I grew up on horror films. I saw ‘The Exorcist’ when I was five. Disney’s ‘The Black Hole’ struck me as light fare, even though my older brother left the theatre crying.”

He picks classic zombie movie “Night of the Living Dead” as his number one scary flick, which despite its “bad acting, cheap make-up and clumsy camera work” still makes him “sick to my stomach”.

Stevens’ most recent film pick is the environmental documentary “An Inconvenient Truth”. He describes presenter Al Gore as “Darth Vader with a Power Point presentation. Yikes.”

“The Avalanche”, an album compiled from outtakes of “Come On Feel The Illinoise”, is in the Top 10 of our favourite 50 albums of 2006.

Find out what the other 49 great albums of the year were, in the December edition of Uncut, out now.

The Brooklyn-based artist kicks off the British leg of his European tour in support of “The Avalanche” at Manchester Academy 2 tonight (November 2).