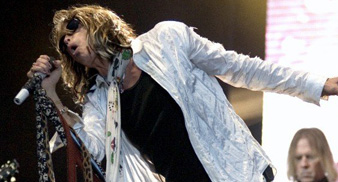 Steven Tyler has said he turned down the chance to replace Robert Plant as the lead singer in Led Zeppelin.

It was already public knowledge that Tyler had auditioned to join Jimmy Page, John Paul Jones and Jason Bonham, but Aerosmith guitarist Joe Perry indicated that Tyler had been turned down.

However, speaking on the Howard Stern Radio Show on US station Sirius, Tyler revealed that Page actually asked him to make a record.

Tyler said he was asked to audition by Peter Mench, Jimmy Page‘s manager: “He [Mench] said Robert wouldn’t play with them again, and would I want to come over and jam with the guys? I went over and played.”

He said that the audition went well and that Page asked him, “You want to write a record with me?” But Tyler reportedly declined: “[I said] ‘No.’ I’m in Aerosmith. He’s in the biggest band in the world and I’m in a band like that. I have such an allegiance to my band and I love it so much.”