What’s playing on the iPod of the sacked England coach 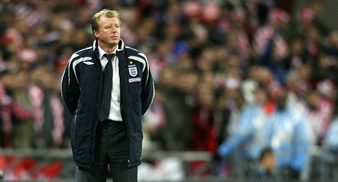 All we had to do was draw with Croatia to qualify for Euro 2008 in Austria and Switzerland… and, well, poor old Steve McClaren, he really blew it, didn’t he?

The England coach was comprehensively outfoxed by his Croatian counterpart Slaven Bilic, and that defeat – to cap a truly dismal qualifying campaign – has cost him his job.

Never mind, we have it on good authority (ie we made it up) that the following tunes are currently on his iPod shuffle – no doubt making him feel a whole lot better…

Surely you lot can come up with some better McClaren puns: email us!


From Jamie, on behalf of our Scottish readers has today sent us these:

On the result/performance:
You Get What You Deserve – Big Star
Its All Over Now – The Rolling Stones
This Magic Moment – The Drifters
The Sound Of Failure – The Flaming Lips
More Pricks Than Kicks – Shane McGowan & The Popes
Dancing In The Street – Martha & The Vandellas

For Steve McLaren:
You Better Move On – Arthur Alexander
Aint Nobody Gonna Miss Me (When I’m Gone) – George Jones (except Scotland fans)