Star Wars’ C-3PO Returns To London For The Stage Show 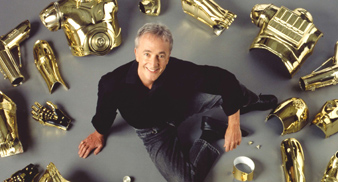 Star Wars’ actor Anthony Daniels has joined the cast of Star Wars™: A Musical Journey, which opens in London next month.

Originally the voice of droid C-3PO in all six of the Star Wars films, Anthony Daniels will take on the role of the voice-over narrator for the new show which features Oscar winning original scores by John Williams perfromed by 86 members of the Royal Royal Philharmonic Orchestra.

Daniels comments on coming to London, saying: “I’m so excited to be asked to tell the story to such a huge audience. Years ago C-3PO conducted the London Symphony Orchestra in the Albert Hall. Most exciting night of his life… mine too. Now it’s my turn to stand on Europe’s greatest new stage at the O2 Arena. I’m not wearing gold this time, but 3PO will be with me in spirit.”

The two-hour live multi-media performance also includes an exhibition of memorabilia from all six films, including original models, props, costumes and production artwork.

STAR WARS: A Musical Journey takes place at the O2 on April 10 and 11.