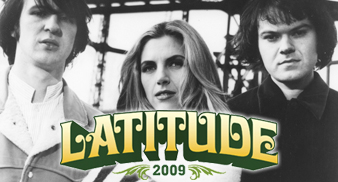 St Etienne have been confirmed for the Uncut Arena at this July’s Latitude Festival, which takes place from July 16-19.

The band who have recently reissued deluxe editions of their acclaimed albums Fox Base Alpha and Continental ( Win copies here!) will join previously announced headliners Bat For Lashes, Spiritualized and Gossip in the popular covered tent.

Also announced this week are further additions for the Literary, Comedy and Music & Film Arenas; highlights including Frank Skinner, Jeremy Warmsley and a collaboration between Grace Maxwell and Edwyn Collins.

Latitude, now in it’s fourth year, is Uncut’s festival of the Summer, and tickets for the weekend are still available for £150 for the weekend, from nme.com/gigs and www.latitudefestival.co.uk.

If you’re feeling lucky, don’t forget there’s a chance to win a pair of tickets, at Uncut’s competitions page here.

The latest additions for the festival are as follows, for all previous updates see our dedicated Latitude 2009 blog here.