Springsteen Pays Tribute To The Clash’s Strummer At Glastonbury 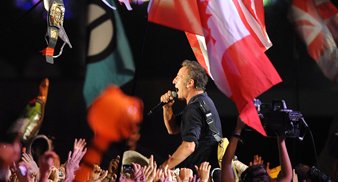 Springsteen opened the his headline set with a tribute to his hero Joe Strummer, by covering a Mescaleros’ track “Coma Girl” before launching into songs including “Outlaw Pete” the standout track from latest album “Working On A Dream”, “The Ghost of Tom Joad” and “The Rising.”

Speaking at his annual press conference Michael Eavis said that 2009 was his best festival yet, exclaiming: “Having Neil Young who I’ve been waiting for for 39 years and Springsteen just appear out of the blue – and of course Blur tonight – we’ve got three major, major headliners.

He added “Neil Young pleased all the old hippie types and Springsteen pleased everyone else. He did a hell of a show, what energy he has at 58 years of age is amazing. What a show! It was probably the best show he’s done in his life. What a starting point, and you have everything else as well of course!”

Springsteen even broke the Pyramid Stage sound curfew by running over by nine minutes, however Eavis said he was more than happy to pay it.

Springsteen was joined by The Gaslight Anthem‘s Brian Fallon on “No Surrender”, Fallon returning Bruce’s surprise appearance during their own set earlier in the day.

The Gaslight Anthem and Bruce Springsteen & The E Street Band are also due to play at Hard Rock Calling in London’s Hyde Park on Sunday June 28.