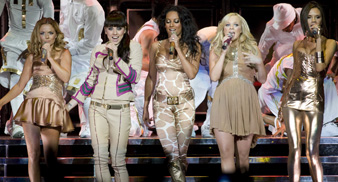 The Spice Girls’ classic line-up of Victoria Beckham, Geri Halliwell, Melanie Brown, Emma Bunton and Melanie Chisholm, took to the stage all together, in front of 15,000 fans at the General Motors Place venue, for the first time since 1998, when Geri quit the band.

Victoria’s husband, David Beckham even made an unexpected appearance at the concert. Beckham flew in from New Zealand, where he has been on tour with his football team Los Angeles Galaxy.

The girl group’s last tour as a four-piece was at Christmas in 1999.

The ‘Return Of The Spice Girls’ show was split into four musical ‘acts’, with eight costume changes, with all of their stage outfits designed by top designer Roberto Cavalli.

They also performed some of their individual post-Spice Girls solo records, including Halliwell’s cover of ‘It’s Raining Men’.

The encore was their debut global hit ‘Wannabe’.

The tour’s next stop is San Jose tomorrow (December 4), followed by shows in Los Angeles and Las Vegas.

The Spice Girls then come to the UK, with three shows at London’s 02 Arena from December 15.

The girls then return to the venue from January 2, for a run of fourteen shows.