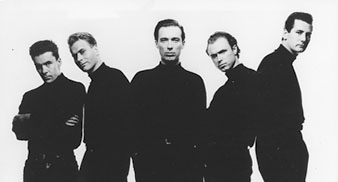 80’s New Romantics Spandau Ballet are set to reform, their manager has confirmed.

“It is true’” manager Steve Dagger told the Sunday Express, “we’re not making announcements yet but yes, the boys are back in town. Not just a nostalgic re-run of the old, but a fresh slant on what Spandau Ballet are about.”

The band will announce the reunion at a launch party aboard the H.M.S Belfast – the venue for their launch gig 30 years ago.

The announcement will be even more surprising given the acrimony surrounding singer Tony Hadley, saxophonist Steve Norman and drummer John Keeble’s decision to sue bassist and songwriter Gary Kemp for unpaid royalties in 1999.

“Every band on the way down is a band on the way up, but I never thought I’d see this one,” said Roy Eldridge former head of the band’s old record label Chrysalis. “Once they couldn’t stand to be in the same room together, let alone play. But now they are older, fatter, poorer, there’s every reason to see if the magic still works.”