Smashing Pumpkins Back In The Studio

New songs to be released on New Year's Day 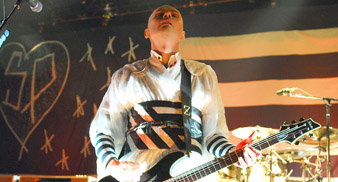 Smashing Pumpkins have hinted to fans that they could have brand new material released in just a few weeks, on January 1.

Drummer Jimmy Chamberlain has posted a message on the Pumpkin’s official website saying they are already back in the studio recording material now.

The message reads: “We are back in the studio recording some songs for a possible release worldwide,” he wrote. “Look for these around the first of the year. Busy Bees!”

It is not known on which format any new material will appear.