See W Before It’s Released At An Exclusive Uncut Screening!

Get a free pair of tickets here! 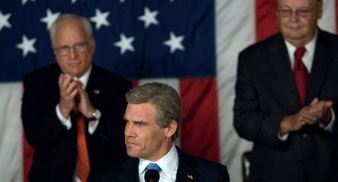 Uncut.co.uk is giving you a chance to watch the latest Oliver Stone film ‘W’ (Dubya) at an exclusive screening; before it’s nationwide cinema release next week!

The film opens on November 7, but Uncut is offering readers the chance to get a free pair of tickets to see W on November 4, the same day as the 2008 US Presendential Election.

Tickets are available at cinemas nationwide (see below for list of venues), on a first-come first-served basis. All you have to do is go to the seefilmfirst.com website and enter the unique code: 108851.

For further information on the film and to see the trailer, check out the film’s official website here: www.wthemovie.co.uk