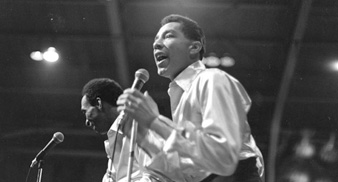 Smokey Robinson has confirmed a series of UK tour dates for this Summer.

The former vice-President of Motown Records who wrote and produced hits for The Miracles and The Temptations, is still recording music four decades later.

Classic hit songs he wrote for Motown in the 60s also include tracks for Mary Wells, Brenda Holloway Stevie Wonder and Marvin Gaye. “My Girl”, “Get Ready” and “My Guy” are just some of his songwriting triumphs.

More recently he released a new album of standards called “Timeless Love” and he has also created his own food range in the US. Smokey Robinson Foods’ The Soul Of The Bowl can be found in all major US supermarkets.

For the first time in several years, Smokey is to play six UK shows, starting at London’s prestigious Royal Albert Hall on June 27.

His show at Manchester Bridgewater Hall on June 30 is part of the city-wide Manchester Jazz Festival.

Tickets go on sale this tomorrow, Friday March 23, at 9am.