Snippet from 'Lord Don't Slow Me Down' 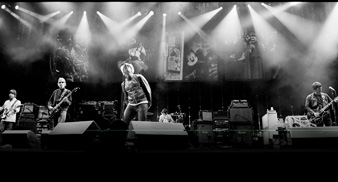 Oasis release a brand new on-the-road documentary ‘Lord Don’t Slow Me Down‘ next month, and for the next eight weeks, Uncut.co.uk will be making clips from the film available for you to see.

The Baillie Walsh directed film follows Oasis on their world tour through 2005, when they visited 26 countries, playing to over 2 million fans.

The double-disc DVD release of the film which had a cinema release last year, will also come with bonus audio commntary from all of the band – Noel, Liam, Andy and Gem who all add their personal recollections throughout.

Oasis are currently in the studio working on a new studio album, due for release in 2008.

To see the first online clip from ‘Lord Don’t Slow Me Down’ – click below to view on Windows Media Player: