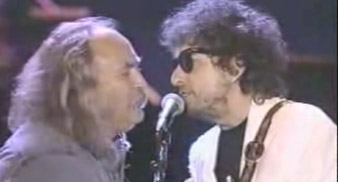 Bob Dylan joins Roger McGuinn, Chris Hillman and David Crosby of The Byrds for a collaborative version of the 1965 hit “Mr Tambourine Man.”

The song, written by Dylan for his album “Bringing It All Back Home” was a Billboard number 1 single for The Byrds in January 1965, prior to Dylan’s own single release the same year.

You can hear McGuinn and Hillman talk about their 1965 LP “Mr Tambourine Man” and five other albums from The Byrds’ back catalogue in the latest issue of Uncut, available now.