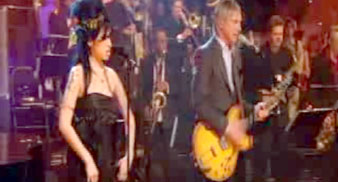 The two singers tackle “Heard It Through The Grapevine,” – the late 60s Motown track made famous by Marvin Gaye.

Jools Holland and his Rhythm and Blues Orchestra back Winehouse and Weller.

On the same episode, Winehouse also performed Toots and the Maytals’ “Monkey Man.”

The title track from her second album “Back To Black” is due for release as a single on April 2.