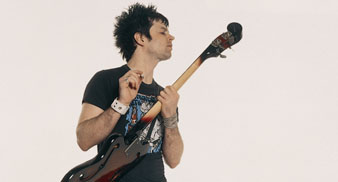 Ryan Adams has streamed what looks like a whole new album of punk tracks online at Ryan-Adams.com called “You Are The Audience”.

It marks yet another surprising new musical direction for the ever-changing Americana singer-songwriter.

The 12 tracks feature high-speed lyrics and crunchy guitars, reminiscent of The Damned and The Ramones, with comical lyrics like “Rats, rats, rats/As big as a cat/Oh crap it’s a rat” (“Rats”) and another track where the chorus is “Bleugh! Bleugh! Bleugh!” shouted throughout.

The fansite has been subject to recent closure, over misuse of the messageboard – Adams’ personal information was maliciously posted online.

The site is back up now.

Check out the new material at ryan-adams.com