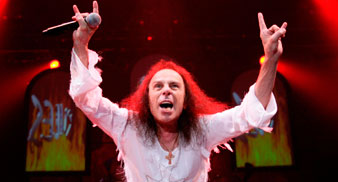 The service, held at the Hall of Liberty, took place on May 30. It was attended by Glenn Hughes, who, along with Dio, was one of a number of singers to perform with Black Sabbath in the 1980s. Paul Shortino of Quiet Riot and Geoff Tate from Queensryche also joined 1,200 fans at the service, according to Associated Press.

Dio lost his long battle with stomach cancer on May 16. He was 67.

Dio‘s cousin and Elf bandmate David Fernstein said: “He touched all of us with his music and his message and his magic. I know that Ronnie truly loved all of you. He had a great appreciation for your loyalty. I’m talking about all you out there, all the fans.”

A planned protest by anti-devil religious cult the Westboro Baptist Church – who oppose Dio‘s supposed links with the devil – took place outside the gates of the venue, though few members were present.