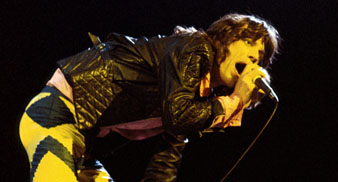 Rolling Stone Mick Jagger has revealed the tracklisting for his forthcoming solo compilation ‘The Very Best Of Mick Jagger.’

As well as featuring three previously unreleased performances, the album’s seventeen tracks are collated from his four solo records spanning three decades; from 1983’s ‘She’s The Boss’ through to 2001’s ‘Goddess In The Doorway.’

“It was such a disparate time with lots of ups and down—fortunately mostly up—like you do generally have in life,” explains Jagger. “For me, it’s a great thing to listen to since all the songs speak to a certain time and make things come alive for me.”

The highlight of the previously unreleased tracks on The ‘Very Best Of’ is the John Lennon produced ‘Too Many Cooks (Spoil The Soup)’ – recorded in Los Angeles in ’73 – with an all-star line-up that included Harry Nilsson, Al Kooper and Jim Keltner amongst the throng of musicians.

The other two rarities are from Jagger’s ‘Wandering Spirit’ album sessions between February and September 1992, with producer Rick Rubin at the helm.

‘Charmed Life’ features Jagger’s daughter Karis on backing vocals, and was not included on the original album as Jagger didnt think it fit in with the rest.

The second track from the ‘Wandering Spirit’ sessions; a cover of Sonny Boy Williamson’s ‘Checkin’ Up On My Baby’ came out of a recording session with LA blues band The Red Devils.

Mick Jagger’s artist collaborations over the years are also on a typical for a Rolling Stone scale – with David Bowie covering Martha & The Vandellas ‘Dancing In The Street’ to raise money for Live Aid, co-writing with Lenny Kravitz for ‘God Gave Me Everything’, duetting with original Wailer Peter Tosh on a cover of The Temptation’s ‘(You Got to Walk And) Don’t Look Back’ and even U2’s Bono guest sings on ‘Joy.’

‘The Very Best Of Mick Jagger’ is scheduled for release through Rhino Records on October 2.