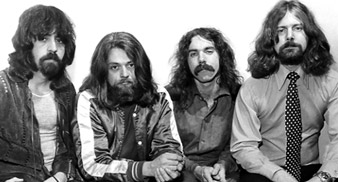 Previously unreleased archive material from The Byrds is shortly to surface for the first time. A recording of the group’s 1971 appearance at London’s Royal Albert Hall – featuring a line up of Roger McGuinn, Clarence White, Skip Battin and Gene Parsons – is to be released in June by Sundazed.

Founder member Roger McGuinn has told uncut.co.uk that the recording came from his private collection – and that more releases of a similar kind would probably follow it.

“We’ve carried these tapes around for 30-something years,” he said. “We just never paid much attention to them. [Sundazed’s] Bob Irwin came down, and he’s a genius at discerning these things. He could look at a box, and go ‘Oh, this is that, and so-and-so was there, this is wonderful.’”

Irwin has taken further tapes from McGuinn, with a view to further releases. “He’s gonna check them out,” said Roger. “There are tentative plans to put out good things we find, but I’m not sure what.”

Though McGuinn’s archive has yielded some delights, Irwin’s investigations have provided one minor disappointment.

Says McGuinn: “He thought he had the only existing recording of the Byrds doing “Milestones” because it said so on the tape box. But when he got it up to his studio and played it back, the track wasn’t there….”