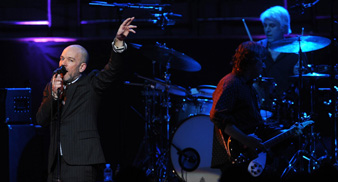 REM have named their forthcoming new album ‘Collapse Into Now’.

Michael Stipe and co’s next effort is set to be released in the first half of 2011. They were aided by producer Jacknife Lee, who also worked on the band’s last album, 2008’s ‘Accelerate’.

Scroll down and click on the videos below to hear snippets of music set for the album, which will be the band’s 15th studio effort.

The album news was revealed by the band’s manager Bertis Downs during an appearance at the In The City music conference in Manchester. He later tweeted to confirm the news.