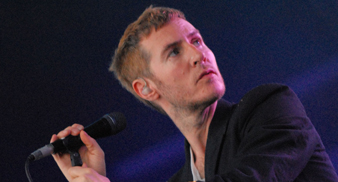 Radiohead frontman Thom Yorke and Massive Attack‘s 3D have hit out at the actions of bankers and the UK government in a rare interview.

The duo played a gig in an abandoned bank in London earlier this week (December 6) to show support for the Occupy movement and have spoken out about their desire for the UK government to take notice of the movement’s aims.

Speaking in a video interview, which you can see by scrolling down to the bottom of the page and clicking, Yorke said that he felt that the banks had “robbed” ordinary people and that those responsible were “not being held to account”, while 3D, whose real name is Robert Del Naja, called the banks’ behaviour “organised crime on a global scale”.

Yorke said: “The banks took the money that was supposed to keep us safe and robbed it and then said it was some kind of act of god. There are people who are responsible and they’re not being held to account.”

3D added: “It’s organised crime on a global scale. In any other situation it would not be protected by the law, but the laws for banks and politicians are the same”.

The Radiohead frontman also said that he believed the UK government were going to struggle to deal with the anger of the general public and were “siding with the wrong people”.

Yorke added: “If I was Prime Minister of this country, I would be wondering how I was going to keep this anger at bay, because the anger’s going to get worse. They’re siding with the wrong people. You cannot keep going with the current system”.

The singer also said that he believed the Occupy movement was the only way that people’s protests could be acknowledged as the other forms of expressing this had disappeared. He added: “How else are you going to register your protest in 2011? Are you going to go and talk to your MP?”